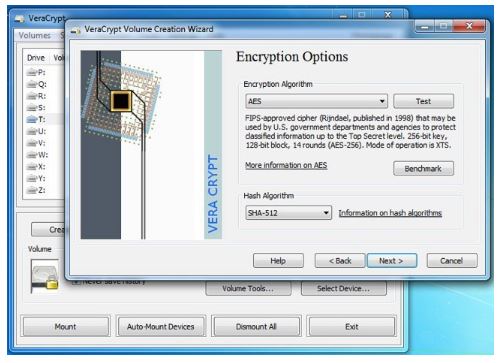 VeraCrypt – is a powerful and reliable disk encryption software brought to you by IDRIX and that is based on TrueCrypt 7.1a. VeraCrypt picks up from where TrueCrypt left and it adds enhanced security to the algorithms used for system and partitions encryption making it immune to new developments in brute-force attacks.

Features
• Creates a virtual encrypted disk within a file and mounts it as a real disk.
• Encrypts an entire partition or storage device such as USB flash drive or hard drive.
• Encrypts a partition or drive where Windows is installed (pre-boot authentication).
• Encryption is automatic, real-time(on-the-fly) and transparent.
• Parallelization and pipelining allow data to be read and written as fast as if the drive was not encrypted.
• Encryption can be hardware-accelerated on modern processors.
• Provides plausible deniability, in case an adversary forces you to reveal the password.