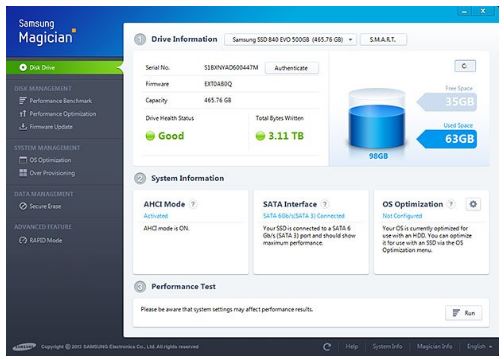 Judging by everything that defines it, Samsung Magician is a well-thought suite, landing users a hand in improving the performance of their SSD drive. Its most important highlights include benchmarking, out-of-the box drive optimization, as well as firmware updates and safe wiping of data.

Relying on an intuitive and user-friendly interface, Samsung Magician gathers all of its features inside one single window, providing easy access to any of the components. A detailed report of the disk drive welcomes you when you first launch it, displaying essential pieces of information on firmware, capacity and the drive health status.

In order to test the SSD drive, you can safely use the built-in benchmarking utility that stresses out the device in order to acquire the sequential read and write speed, which are relevant indices for measuring disk performance.
Other helpful utilities are to be found in the OS Optimization section, which sports a few configurations for tweaking the OS to work at its best with your SSD. You can

choose from three pre-defined profiles, such as Maximum Performance, Maximum Capacity and Maximum Reliability, but you can also create a custom scenario via the Advanced tab.

One of the most exquisite features of Samsung Magician is the RAPID Mode, which manages to increase disk performance by using up to 1 GB DRAM as a cache for ‘hot’ data (frequently used data). This utility, although developed exclusively for the Samsung 840 EVO model, is said to also work with the 840 PRO SSD.
Considering all of the above, Samsung Magician makes the perfect SSD companion, keeping tabs on disk performance and health in just the right amount.