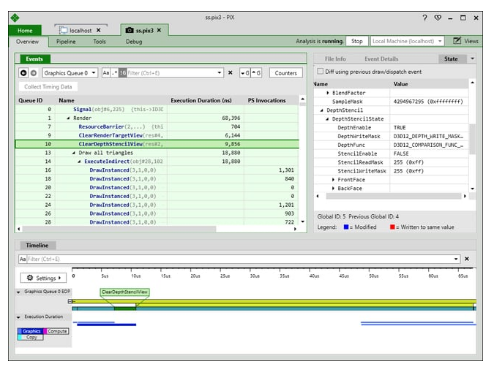 Microsoft PIX – Creating a game is not easy, as even basic ones require a lot of work and a proper set of tools to carry out the task. IDEs, graphical designing programs, and motion management tools can take care of the way the game looks and behaves, but evaluating resource consumption is a whole other thing.

With a rather rich history related to the Xbox platform, the Windows edition of Microsoft PIX is designed for both professional and amateur game developers, providing them with a game performance assessment, debugging and tuning application.

Evaluates DirectX 12 games to optimize their performance
Resource consumption optimization is essential, especially for games with high resource requirements. Microsoft PIX can provide insights of the entire rendering process and the way it affects the performance of the host system. Thus, it can prove to be a real asset in a developer’s toolbox, helping in spotting different issues related to image synchronization and frame rendering.

Microsoft PIX works with DirectX 12 games, connecting to a local or a remote PC to analyze and evaluate a game as it is being played. It can target UWP and Win32 processes, or attach to one of the running processes. Before using it, please make sure you have the latest GPU drivers installed. Otherwise, some features might not work properly or at all.

Assesses GPU and CPU usage, function calls, execution time and memory allocation
There are various modes it can work in, each with its own individual role; they all contribute to the bigger picture that illustrates the game performance.

To get into details, the first mode of operation is GPU capturing, which helps assess the capabilities of the game in terms of Direct3D graphics rendering. GPU captures record Direct3D API calls the game makes, which can be played back during the analysis to gather information that can be of help during debugging. It is advisable one reads the documentation to get a clear view on the capabilities of Microsoft PIX before using it.

Timing captures deliver details regarding the CPU and GPU usage in real time, as the game is running. In other words, it enables developers to check CPU threads, see how tasks are distributed to the CPU’s cores, or check rendering latencies.

The Function Summary mode gathers data about the execution time and the overall number of function calls. In turn, the Callgraph mode targets a particular function to check how often it is being called.

Take the time to read about the application before using it to discover its full potential
With advanced resource usage assessment tools and remote connection support, Microsoft PIX can be a powerful tool in the right hands. It only requires game developers to take the time to discover its features, either by taking a glance at the documentation, or by watching the introductory video.