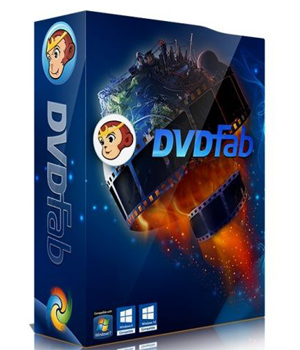 DVDFab – is the most powerful and flexible DVD/ Blu-ray copying/ burning software. Also it’s a fantastic file converter and transfer which can rip and convert DVD/Blu-ray movies or transfer your local files to various portable devices like iPod, iPhone, PSP, cell phone, ZUNE, etc. With 8 copy modes, you can back up any DVD to DVDR in just a few clicks. DVDFab is simply the easiest way to copy a DVD/ Blu-ray movie. Just insert the movie and a blank DVD/ Blu-ray then press Start. Your entire movie – including menus, trailers and special features – is copied to a single DVD/ Blu-ray with just one click, and everything happens automatically. Backup your entire DVD/ Blu-ray – including menus, trailers, and special features – onto one or multiple discs.

Features
• DVDFab “Blu-ray to Blu-ray” is the first full-featured Blu-ray copying/burning software. With 4 copy modes, you can backup Blu-ray to BD-R or hard drive in just one or a few clicks.
• DVDFab “DVD to Mobile” converts DVD title to AVI/MP4/WMV/MKV files which can be played on mobile devices like iPod, PSP, ZUNE, cell phone, etc.
• DVDFab “File to Mobile” converts source video file on your PC to next generation console like PS3 and Xbox 360, or mobile devices like iPod, PSP, ZUNE, cell phone, etc.
• DVDFab “File Mover” option transfers converted files to mobile devices like iPod, PSP, ZUNE, etc.
• DVDFab DVD Copy is popular worldwide and known for its power and flexibility. You can copy a DVD with just a click or two, or use DVD Copy’s many settings to customize the ouput. Burn it to a blank DVD or write the output to a folder or image file on your hard drive or media server, compress content to fit on smaller discs, the choice is yours!