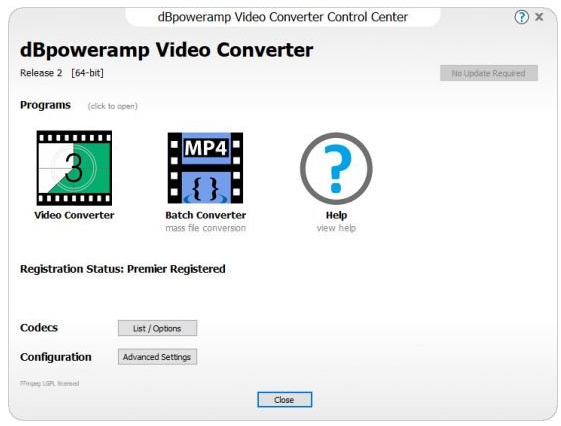 Batch Convert
• Large numbers of files and folders with 1 click, filter on mp4 or other file types. Join multiple videos together as one.

High Speed Conversions
• Look for a video converter which encodes using all CPU cores simultaneously? get the job done in double quick time. Use your NVidia graphics card GPU to speed-up conversions to mp4 (h264, h265).

DSP Effects
• Process video and audio with effects, such as scale, or denoiser dBpoweramp is a fully featured video converter.

No Malware
• Free converters come with a little extra (a spying toolbar, Trojan, malware, or virus), dBpoweramp has never bundled in 15 years, those wanting just a video converter, get just that and only that. No Trojan, no malware, no viruses.

Simplicity
• dBpoweramp integrates into Windows Explorer, that is as simple as right clicking on the video file >> Convert To. Popup info tips are all provided giving details of the internals of your videos.