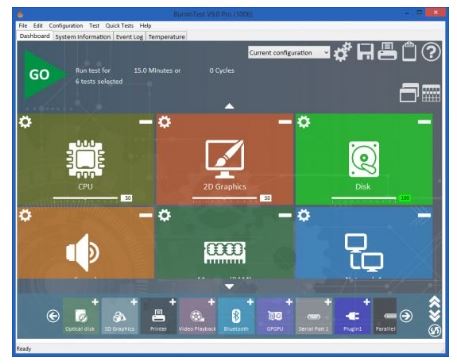 BurnInTest Pro – is the computer stability and reliability testing software for Windows and Linux. It is a software tool that heavily loads all the major subsystems of a computer with the aim of thoroughly exercising the hardware in a PC in a short period of time. The software tests the CPU, hard drives, RAM, CD-ROMs, CD burners, DVDs, sound cards, 2D graphics, 3D graphics, network connection, printers, video playback. If you have specialized hardware that BurnInTest does not test, you can even write your own test and integrate it with BurnInTest. PassMark has produced plugin tests for Keyboards, Dial up Modems and FireWire ports. This can all be done simultaneously as the application is multithreaded.

PassMark BurnInTest Pro is a software tool that allows all the major sub-systems of a computer to be simultaneously stress tested for endurance, reliability and stability. The Professional version also has a number of additional features such as tape drive testing, USB port testing, USB 2.0 port testing, Serial and parallel port testing with the use of loop back plugs.

Features
• Assists in PC Troubleshooting and diagnostics.
• The best value professional burn-in tool on the market!
• The hottest, fastest CPU Burn In tool around! (See our CPU Heat Generation benchmark testing)
• Avoid delivering D.O.A. (Dead on Arrival) hardware to your customers.
• Dramatically reduce your burn in times with multithreaded simultaneous testing of components.
• Build your image as a supplier of quality systems.
• Avoid costly downtime, system rebuilds and lost data.
• Test the stability of a system after configuration changes or hardware upgrades (critical for overclocking).