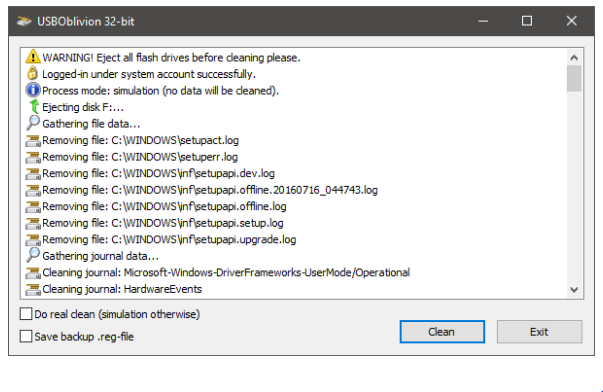 USBOblivion – is designed to erase all traces of USB-connected drives and CD-ROMs from the registry in Windows XP, Windows 2003, Windows Vista, Windows 7, Windows 8, Windows 10 32/64-bit versions. The utility has a test mode of operation, i.e. without actually removing data from the registry, and, just in case, creates a .reg-file to undo any changes. There is also a fully automatic mode.

USBOblivion is a tiny and portable application designed to get rid of all Windows registry traces left by USB drives and CD-ROMs. It takes care of the entire process on its own, requiring minimal user intervention.

Since installation is not a prerequisite, you can save the EXE file to any folder on the hard disk and just click it to run.

There is also the alternative of saving USBOblivion to a USB flash disk or similar removable device, in order to run it on any machine with minimum effort and without previous installers.

What’s more, the app does not add new entries in the registry or Start menu, as it usually happens with installers, leaving the disk clean after removal.

The interface is represented by a standard window with a plain and simple layout, where you can start the cleaning procedure with the click of a button. Before doing so, you can ask the program to create a backup of the registry and keep it on the hard drive, just in case Windows starts experiencing issues afterward.

Instead of running a cleaning session, you can perform a simulation to view and analyze log details shown in the main frame, such as the exact keys that will be removed.

USBOblivion is very low-demanding when it comes to CPU and RAM, so it does not hog system resources. It finishes a cleaning job very quickly and without issues. No error dialogs were shown in our testing, and the utility did not hang or crash. Thanks to its intuitive layout and overall simplicity, even first-time users can use USBOblivion with confidence.