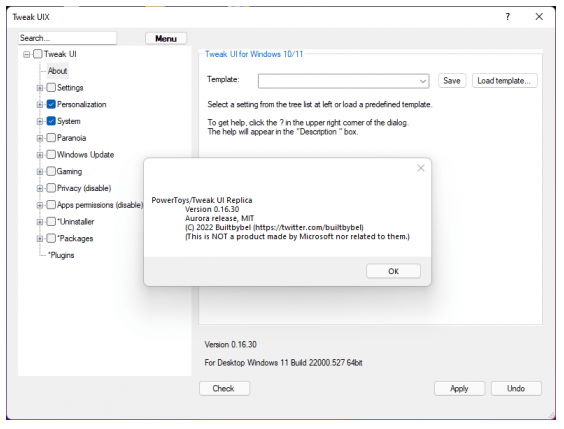 TweakUIX – Tweak UI is a small tool that allows you to customize some settings of your operating system. The user interface is rather simple and easy to use, consisting of a standard window and several commands.

Tweak UI was part of Windows XP PowerToys and one of the most known Windows PowerToys to tweak the User Interface (UI). With this tool you are able to change settings, which aren’t reachable within Windows. Since the release of Windows 95, Microsoft has made available a set of “PowerToys”, which is a suite of extra little utilities that Microsoft feels power users would appreciate. Now, after about 25 years, Microsoft has resurrected PowerToys for Windows 10 and Windows 11. But my favorite tool is still missing…
Tweak UI has never been seen since Windows XP again.

I brought it back as an internal tool for myself a year ago. This is also where my app ThisIsWin11 came from.

Today im releasing this little standalone tool under the name TweakUIX. Its pumped with customization features and also options to remove unnecessary fat from Windows or even installing software packages.