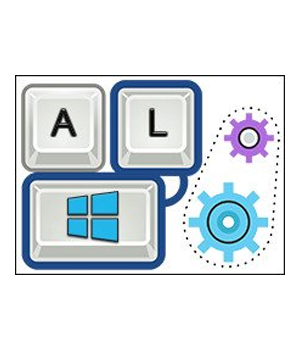 Send Windows Key – The Windows logo key is a keyboard key which was originally introduced on the Microsoft Natural keyboard in 1994. This key became a standard key on PC keyboards. When pressed with no other key, the Windows key displays the Start menu/screen. When pressed in conjunction with another key, it provides shortcuts to several Windows functions. These shortcuts can speed up common tasks. For example, pressing the Windows key + E (press and hold the Windows key and then, while holding that key, press the “E” key, and then let go of both buttons) opens Windows Explorer.

SendKeys methode allows you to send keystrokes just as if you had manually typed them on the keyboard . For example ; if you trying to make a script that automatically opens a few applications and resizes them to the corners of your screen and you want to do that with the WinKey + Arrow Keys you can’t do it with batch , Vbs … usw.

Oddly enough, Microsoft didn’t add a special code to the SendKeys method that would allow you to access the Windows key. Send Windows key is a very simple Portable freeware and helps to run the keyboard key combination which using with the windows key.