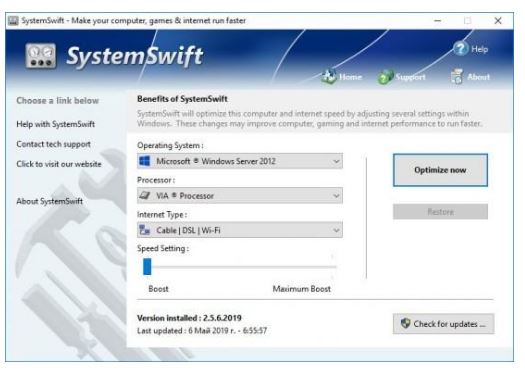 PGWARE SystemSwift – will quickly scans your computer for common problems and fixes them, it then makes several permanent changes to Windows so your computer feels like it is brand new once again. Don’t deal with a slow computer and make tasks take longer to complete, install SystemSwift and make your computer run faster.

Over time as you install new and updated software, you get the impression your computer is slower due to these applications being more demanding of faster hardware. SystemSwift makes your computer faster by making several changes to Windows settings; for instance it turns off several animations that degrade performance, instructs the CPU how to prioritize background tasks, how files are loaded and written to the hard drive, changes to the way memory is used when programs use the memory swap file and the overall speed of your internet connection and latency.

Features
• Compatible with Microsoft Windows 10, 8, 7, Vista, XP & Windows Server 2012, 2008, 2003. 32-BIT/64-BIT ready.
Optimizes your computer hardware to allow your computer to run faster and increase the speed of your internet connection for faster downloads and speed.
• Increases the speed of all internet connection types such as Cable, DSL, U-Verse, Fios and dial-up.
• Increase the frames per second that is displayed allowing games to play much smoother and increase your enjoyment of these games.
• SystemSwift repairs common problems found on most computers and instantly fixes them to improve computer stability and performance.
• Changes are made to the Windows system permanently, allowing you to perform a single one time tune-up to increase performance forever.
• New and improved modern user interface, easy and intuitive to use and compliant with Windows user interface guidelines.
• Software updates can be downloaded and installed directly from inside the application without having to visit our web site.