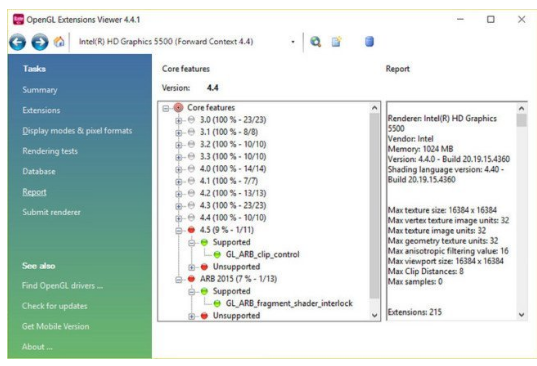 OpenGL Extension Viewer – is reliable software which displays the vendor name, the version implemented, the renderer name, and the extensions of the current OpenGL 3D accelerator.

Many OpenGL extensions, as well as extensions to related APIs like GLU, GLX, and WGL, have been defined by vendors and groups of vendors.

Features
Information you can view
• This software utility analyzes your PC’s hardware and software, and provides you with details regarding your graphics renderer, such as the DirectX version, the shader model, the OpenGL version and driver version, as well as the renderer model and adapter RAM. Each of these values affect the performance of your PC’s rendering ability, so a better graphics card, along with more RAM modules could significantly boost your PC.

Use a provided benchmark
• You have the possibility to manually test the performance of your graphics renderer using the tests provided by OpenGL Extension Viewer – if you experience lags or slowing down of the PC, you are advised to choose a lower resolution for your screen.
• The tests offered by this application can assess the functionalities from OpenGL 1.1 to OpenGL 3.1, and you can combine screen resolutions, texture LOD bias, multisampling and effects such as PBuffer or fog.

Performance and final assessment
• The computer’s performance might be hampered from time to time, especially during the performance test, yet this is not reason to panic, as it is quite normal. The response time is good, yet it also depends on your PC’s configuration, running better on new machines than older ones.
• Since it can save you a lot of time you would otherwise spend troubleshooting crashed OpenGL apps, OpenGL Extension Viewer proves to be a useful tool, which can be used by both beginners and highly experienced people.