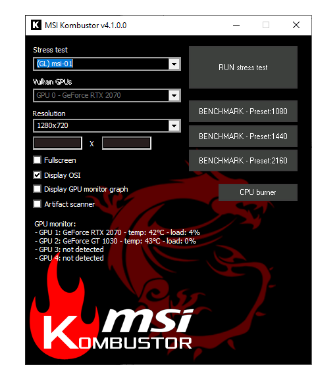 MSI Kombustor – is a software application which allows you to perform a benchmark test on your graphics card. It can be handled by users who carefully monitor their system’s components, such as video gamers and web developers, in this case.

The interface of the program is uncomplicated. Upon initialization, MSI Kombustor automatically displays the primary graphics card, device ID, driver and OpenGL of your computer, as well as the temperature, load level and power of your graphics cards.

There are three 3D tests available for you to run – Wavy Plane (GL2), Fractal Frame (GL3) and Triangle of Death (GL2). So, you can run a stress tests and find out the average frames per second.

It is also possible to run a preset in 1080p or 720p; although it’s high-demanding concerning system resources, this type of test is particularly useful when it comes to high-end video games. Additional information and test scores may be checked out on a webpage.

Additional features of MSI Kombustor allow you to perform a GPU burn-in test on the 3D API (OpenGL 2, OpenGL 3, Direct 3D 9, Direct 3D 10, Direct 3D 11) and to select a 3D object between MSI, Torus, Sphere of Box. Moreover, you can enable Post FX (handles motion blur), as well as run an OpenGL 4 and PhysX benchmark test with music.