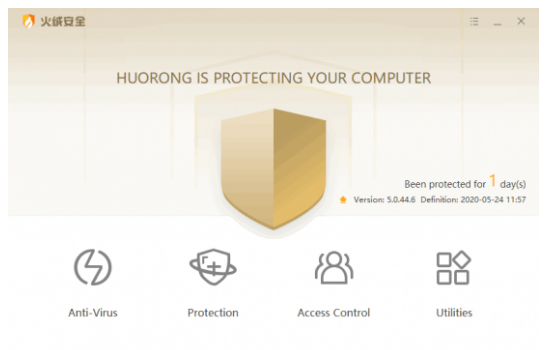 Huorong Free Antivirus is a multifunctional product focused on protecting your computer and important data with minimal resource consumption.

Features
• Own antivirus engine called Cobra. HVM (Huorong Virtual Machine): High potential to detect known threats and their variants. Tiny virus database (less than 5 MB), but covering most malware (one signature can correspond to thousands of variants).
• Powerful HIPS. Support for custom rules.
• Antivirus can be configured so that it displays messages when a threat is detected, rather than automatically sending files to quarantine.
• Normal or accelerated (increased system load) scan modes.
• Unlike Qihoo 360, Huorong antivirus catches Chinese adware without whitelisting it.
• Poorly detects new threats (there is no cloud engine yet); in some situations the performance is not that good.
• Antivirus takes only about 35 MB of disk space after installation on the system.
• Chinese developer Huorong Security is recognized by Microsoft as an antivirus software provider for Windows.