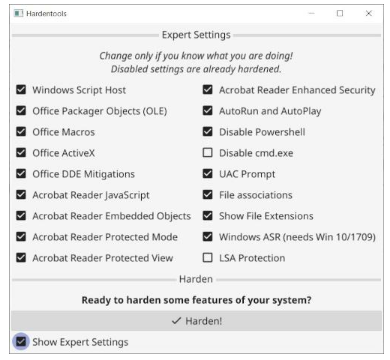 Hardentools – is a collection of simple utilities designed to disable a number of “features” exposed by operating systems (Microsoft Windows, for now), and primary consumer applications.

These features, commonly thought for Enterprise customers, are generally useless to regular users and rather pose as dangers as they are very commonly abused by attackers to execute malicious code on a victim’s computer. The intent of this tool is to simply reduce the attack surface by disabling the low-hanging fruit.

Hardentools is intended for individuals at risk, who might want an extra level of security at the price of some usability. It is not intended for corporate environments.

Features
Generic Windows Features
• Disable Windows Script Host. Windows Script Host allows the execution of VBScript and Javascript files on Windows operating systems. This is very commonly used by regular malware (such as ransomware) as well as targeted malware.
• Disabling AutoRun and AutoPlay. Disables AutoRun / AutoPlay for all devices. For example, this should prevent applications from automatically executing when you plug a USB stick into your computer.
• Disables powershell.exe, powershell_ise.exe, and cmd.exe execution via Windows Explorer. You will not be able to use the terminal, and it should prevent the use of PowerShell by malicious code trying to infect the system.
• Sets User Account Control (UAC) to always ask for permission (even on configuration changes only) and to use “secure desktop.”
• Disable file extensions mainly used for malicious purposes. Disables the “.hta”, “.js”, “.JSE”, “.WSH”,.”WSF”, “.scf”, “.scr”, “.vbs”, “.vbe” and “.pif” file extensions for the current user (and for system-wide defaults, which is only relevant for newly created users).
• Shows file extensions and hidden files in explorer.
• Windows Defender Attack Surface Reduction (ASR). Enables various remediations using ASR starting with Windows 10 / 1709 (Block executable content from email client and webmail, Block Office applications from creating child processes, Block Office applications from creating executable content & from injecting code into other processes, Block JavaScript or VBScript from launching downloaded executable content, Block execution of potentially obfuscated scripts, Block Win32 API calls from Office macro). Needs the following prerequisites to work: (1) Windows 10 version >= 1709, (2) You are using Windows Defender Antivirus as the sole antivirus protection app. (3) Real-time protection is enabled in Windows Defender.

Microsoft Office
• Disable Macros. Macros are at times used by Microsoft Office users to script and automate certain activities, especially calculations with Microsoft Excel. However, macros are currently a security plague, and they are widely used as a vehicle for compromise. With Hardentools, macros are disabled, and the “Enable this Content” notification is disabled, too, to prevent users from being tricked.
• Disable OLE object execution. Microsoft Office applications can embed so-called “OLE objects” and execute them, at times also automatically (for example, through PowerPoint animations). Windows executables, such as spyware, can also be embedded and executed as an object. This is also a security disaster that we observed used time and time again, particularly in attacks against activists in repressed regions. Hardentools entirely disables this functionality.
• Disabling ActiveX. Disables ActiveX Controls for all Office applications.
• Disable DDE. Disables DDE for Word and Excel

Acrobat Reader
• Disable JavaScript in PDF documents. Acrobat Reader allows executing JavaScript code from within PDF documents. This is widely abused for exploitation and malicious activity.
• Disable execution of objects embedded in PDF documents. Acrobat Reader also allows the execution of embedded objects by opening them. This would normally raise a security alert, but given that legitimate uses of this are rare and limited, Hardentools disables this.
• Switch on the Protected Mode (enabled by default in current versions)
• Switch on Protected View for all files from untrusted sources
• Switch on Enhanced Security (enabled by default in current versions)