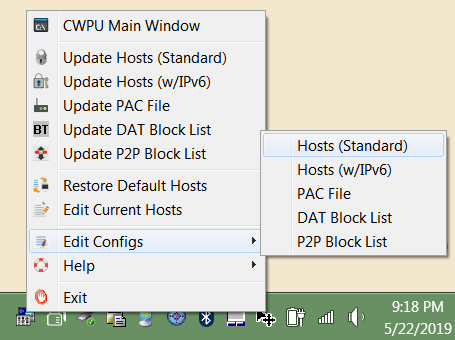 Combined Windows Privacy Utilities – is a free and open source suite of integrated tools for Windows users, to help them guard their privacy and security. It does this through drastically simplifying the work of retrieving, parsing, and structuring data from a number of different trustworthy block lists, then combining them into single, usable files, and putting them in their proper places. A simple installer is provided (just click this link to download it), to make everything easily accessible. The program can be installed anywhere on any device that runs Windows, along with USB drives, as all of the utilities dynamically recognize proper system paths. It creates no registry entries, cleans up after itself, and if one chooses to uninstall it, no files are left behind.

CWP Utilities automates the process of maintaining an up-to-date and comprehensive hosts file, in order to block a variety of trackers, advertisements, and malware, on a system-wide level. It also enables the average user to easily keep the block lists for their file sharing applications up-to-date and thorough, along with facilitating the easy utilization of a Proxy Auto-Configuration (or PAC) file, for ad and tracker-blocking on devices that are less configurable (e.g. non-rooted phones). Think of it as a more capable, efficient and modern replacement for HostsMan, even though it’s not as pretty. It can also fetch hosts lists from servers HostsMan cannot, thanks to an up-to-date build of wget for Windows.

CWP Utilities currently provides a system tray-based interface and a simple, interactive command line interface, allowing the user to perform the aforementioned tasks hassle free. The hosts file updater automatically installs the resultant list in the proper system location and flushes the DNS cache for immediate use. Along with merging and sorting the data from multiple block lists out of the box, it also reduces the size of the hosts file via an optimization script, allowing for slower machines to utilize larger block lists. Obviously it de-duplicates the data as well, and has an option to create entries that will block malicious traffic over IPv6 too.

The file sharing block list updaters output their lists in a subdirectory of each tool’s folder, which can simply be moved to another directory of the user’s choosing thereafter, or left in place. An explorer window appears upon completion of the block list update, revealing the location of the list. The PAC updater does the same, but a template script is also included that allows for greater flexibility.

All the scripts which perform these routines are configurable directly in a text editor of one’s choosing, or via the simple yet capable text editor shipped with CWP Utilities. More useful features are planned for the future, as is a more flexible GUI, but I thought I would start sharing fully functional releases with the public, in hopes that others will find my tools as useful and beneficial as I have.

This set of utilities is inspired by a lot of scripting work I have done over the years to automate repetitive tasks on my personal devices, and during my stints as a SysAdmin. It is built around significantly friendlier Windows versions of the scripts from my Combined Privacy Block Lists repository, which also contains some lists I maintain, and more software. If anyone would like to pitch in – especially in regard to crafting a more comprehensive GUI – I would be more than happy to work with you as time allows.

All of the scripts and underlying binaries have been tested on 32 and 64 bit versions of Windows 7, Windows 8.1, and Windows 10, though it should all work in Vista as well.