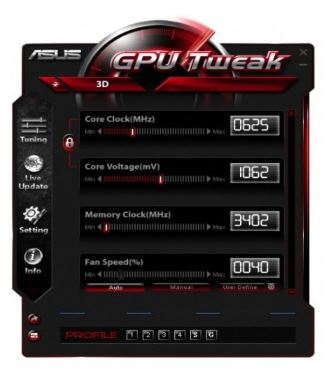 ASUS GPU Tweak – allows you to optimize clock speeds, voltage and fan speeds on up to four graphics cards independently or simultaneously, you can also select between GPU Tweak’s Standard or Advanced modes depending on your level of experience.

ASUS makes serious hardware for die-hard overclockers who want to squeeze every ounce of performance out of their gear and never back down from a challenge.This experience is enhanced further with the all new and intuitive ASUS exclusive GPU Tweak utility – allowing you to monitor and optimize settings for ultimate performance on any graphics cards.

ASUS GPU Tweak was introduced back in the summer of 2011 as the ASUS homegrown application software for overclocking graphics card adapters. Since then, it received more than twenty-five updates focused on increased compatibility and extended support for the newly introduced series while constantly trying to infiltrate the community by competing with the mogul: MSI Afterburner.

ASUS GPU Tweak has come a long way since its release and started making a name for itself as a reliable companion for a far from risk-free operation. While many would still recommend MSI Afterburner to be used with any graphics adapter, ASUS GPU Tweak can prove to be a worthy alternative, especially when the card at hand is, indeed, an ASUS.